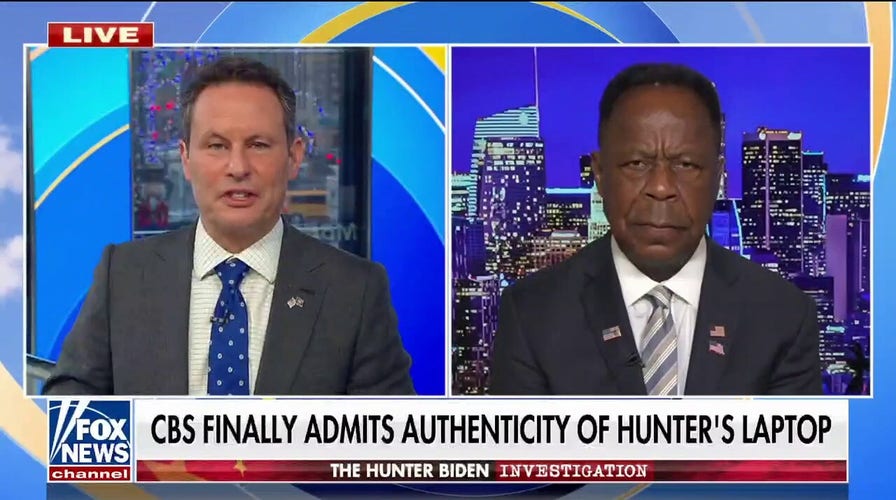 Terrell, on “Fox & Friends,” said CBS “knew about” the laptop’s authenticity a long time ago, arguing they elected to deny the scandal and acknowledge its authenticity only after the 2022 midterms.

“What’s the motivation for CBS to have this news story on Thanksgiving week? It was after the midterms, they knew the House was taken over by House Republicans, they knew about the investigation that’s coming, and they want to basically make amends,” he told Brian Kilmeade.

“CBS knew about this. They hid this information to the detriment of President Trump and to the benefit of the campaign for Joe Biden.”

The laptop, initially reported by the New York Post just before the 2020 election, led to a tense exchange between former President Trump and CBS’ Lesley Stahl in which Stahl claimed the laptop’s authenticity could not be verified.

Backtracking on the claim, “CBS Mornings” aired a segment Monday showcasing computer experts who claimed the “sheer volume” of the laptop’s contents would be “difficult, if not impossible, to fabricate.”

Joe Concha, weighing in on “Fox & Friends First” Tuesday, slamming Stahl and CBS for the significant flip from the vehement denials ahead of the 2020 election.

“We’re talking 25 months later and CBS is talking about this like they had breaking news that suddenly came off the wire… you’re going to sit here now, CBS, and tell me that you even remotely attempted to verify the contents of the laptop back then [in 2020], or did you find it easy to just peddle what everybody else did, which was Russian disinformation?” he said.

He slammed other mainstream outlets for “verifying the damning contents” of Hunter’s laptop months after the New York Post saw friction with other media and Big Tech for publishing the story, adding that he believes an investigation into Hunter Biden’s shady business dealings would be dismissed similarly by the same outlets.

Terrell and Concha also slammed CBS for covering for President Biden who allegedly knew about his son’s business dealings at the time.

The New York Times, Washington Post, NBC News and Politico are among other outlets that previously verified the laptop’s authenticity.

Taylor Penley is a production assistant with Fox News.