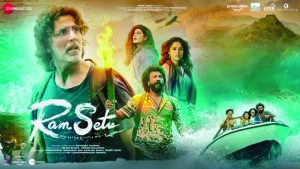 Synopsis: Is Ram Setu a myth or reality? An archaeologist (Akshay Kumar) must decode the origins of the mythical India-Sri Lanka underwater bridge, believed to be built by Lord Rama.
Review: Ram Setu comes across like a toothpaste ad where random actors dressed in white aprons assure you that their toothpaste is dentist recommended. The ‘doctor ki suno’ strategy is to convince people about the product’s scientific benefits and claims. Ram Setu does pretty much the same. It puts together characters parading as scientists, environmentalists, experts in archaeology with only one intention —they must acknowledge, approve and propagate the legacy of Shree Ram and Ram Setu (mythical bridge between India and Sri Lanka) as part of history and not mythology. Since these characters believe in science over sanskriti and aastha, the director wants you to know that they are no bhakts so there’s no bias.


Leading the atheist-turned-believer brigade is Dr Aaryan, a 50-something Akshay Kumar with a millennial name. Styled like an ageing Brad Pitt in homeless chic, Aaryan is a renowned archaeologist, known for his excavation in Afghanistan. He graciously hands over an ancient treasure box to the neighbouring country and reiterates India-Afg-Pak unity against the Taliban. He announces, “Hum Afghanistan ko unki khoi hui virasat lautane aaye hai.” He also keeps repeating, “I am a man of facts and history. I only believe what can be proven.” Accused of blasphemy, he is taunted, “Iss desh mein jo Ram ko nahi manta, uska muh kaala hona chahiye.”
Given his lack of belief in God and religion, he is chosen for a dubious expedition. An evil corporate (led by the very talented south actor Nassar), wants to destroy Ram Setu for commercial gain, but there’s a catch. He needs evidence that can prove in the Supreme Court, that the bridge is not man-made (or Ram made), instead naturally formed. If proven so, no religious sentiments would be hurt on its destruction. He ropes in atheist Aaryan assuming his verdict would definitely go in his favour. However, surprise-surprise, that’s not the case. Even a five-year-old can tell what Aaryan discovers on this mission.
A lop sided argument on mythology versus history, Ram Setu is the kind of film, where you can precisely tell the final outcome in the first scene. There is no joy of discovery because it plays out like a poorly scripted reality show that isn’t even discreet about its agenda. The film is painfully predictable and blatantly manipulative. Even if you overlook the motive, the supposed survival- drama, is way too dull and far-fetched for a mythical adventure movie. Characters locate ancient hidden caves, floating rocks, manuscripts, sanjeevni booti and Ravana’s Lanka faster than services of food delivery apps.
There’s also a poor man’s, Iron Man like (minus Jarvis) underwater suit that Akshay slips into for this expedition that fails to heighten your curiosity and awe. If the build-up is disappointing, the climax only gets worse. Set in a courtroom, Aaryan rants about ‘progress not at the cost of sanskriti’. In its desperate attempt to reframe mythology as history and vice versa, it does a lot of disservice to Shree Ram’s legacy and faith in general. Barring a few decent chase sequences, Ram Setu has no spark and is way too preachy. Lord Rama doesn’t need a salesman or films acting as Instagram influencers for him.
Indo American News
Log in – Powered by WordPress – Designed by Gabfire Themes