Total hours of content produced was 413, but five-year average is 419
Screen Australia’s 32nd annual Drama Report released this week shows an all-time high expenditure in Australia on scripted screen drama spend of $2.29 billion, made up of a record spend on Australian titles of $1.51 billion, plus $777 million spent on foreign productions.
While the drama spend is up significantly, with the cost of the average hour of production jumping significantly, the average number of hours of drama has remained steady.
Overall $2.29 billion was spent across 162 drama screen productions that commenced production or post-production in Australia in 2021/22 compared to $1.94 billion spent across 163 productions in 2020/21.
The increase was driven by a record spend on Australian theatrical features ($786 million up from $495 million last year), as well as a record spend on Australian subscription TV and Subscription Video On Demand (SVOD) – for which number of titles, hours and budgets have tripled from 2020/21.
Spend on Free-to-air (FTA) TV and Broadcast Video On Demand (BVOD) drama, and children’s drama across TV and VOD platforms also increased from last year, but has not returned to previous highs in either category.
Spend on foreign Post, Digital and Visual effects work (PDV) in Australia hit a new record of $335 million, and spend on foreign titles that shot in Australia dipped from its record high last year but is still well above the 5- year average.
New South Wales set a new record of drama spend in the state, with over $1 billion and 45% of the national share, and Victoria also achieved a record high with $556 million (24% of the national share).
Collective drama spend in the Australian Capital Territory, Northern Territory and Tasmania also set a new record, more than tripling from last year’s $18 million to $57 million in 2021/22, or 2% of the national total.
Mark Coles Smith as Jay Swan with Grace Chow as Cindy, Mystery Road Origin – Photograph by David Dare Parker
In 2021/22, total spend on Australian theatrical feature films reached a record $786 million — an increase of 59% on 2020/21, and 89% up on the 5-year average. This result came with 24 features going into production, 35% below the 5-year average. Higher budget projects Furiosa, Better Man and Foe accounted for a significant proportion of the record spend.
Most of the projects were made for over $5 million, and the number of titles made for under $1 million continued to decline.
Foreign investors contributed the largest share of finance to the 2021/22 slate, making up 44% ($347 million). In total, domestic governments and government agencies provided 45% of total finance for Australian feature films in 2021/22. This includes 35% from the Federal Government, via the Producer Offset and Screen Australia direct funding.
In 2021/22, a total of $655 million was spent on 62 Australian general television and video-on-demand (VOD) projects, close to double the spend in 2020/21.
This year the Drama Report has been re-categorised across television and VOD drama to reflect evolving content platforms and audience viewing habits. The report is now comprised of: Australian general FTA TV and BVOD drama; Australian general subscription TV and SVOD drama; and Australian general Advertising- based Video On Demand (AVOD), Transactional Video On Demand (TVOD) and other online drama. 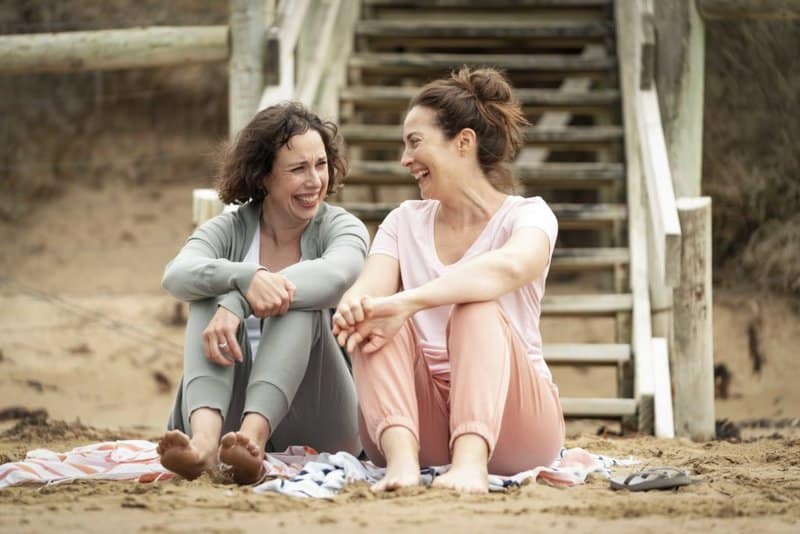 FTA TV and BVOD drama is drama first released on either FTA television — ABC, NITV, SBS, Seven, Nine and 10 — or those broadcasters’ online platforms — ABC iview, SBS On Demand, 7plus, 9Now and 10 play.
In 2021/22 there were 24 Australian titles totalling $208 million expenditure, an increase of 8% on last year, but 8% below the 5-year average. Of these titles, 19 were created for the public broadcasters. The number of hours produced for FTA broadcasters has been in steady decline since 2000/01, when 715 hours of general drama was produced for free-to-air television, and this year there were 278 hours generated.
The number of series/serials produced decreased for the third year in a row, with nine titles down from the 5-year average of 16. Titles included Home and Away (Seven), Neighbours (10) and Aftertaste (ABC). Eleven mini-series entered production – steady on last year – including Barons (ABC), After the Verdict (Nine), and Safe Home (SBS).
General subscription TV and SVOD drama is drama first released on either subscription TV and related platforms — Foxtel, Foxtel Now, Foxtel Go and other Foxtel services — or subscription VOD platforms such as Amazon Prime, Binge, Disney+, Netflix, Paramount+ and Stan.
This year 29 Australian titles entered production, up from just nine in the previous year. Spend increased significantly to a record $445 million, up from $119 million in 2020/21 and more than double the 5-year average.
There was increased production across most platforms, including Stan which had seven titles in this year’s slate, including Bad Behaviour and Bump series 2 and 3. Paramount+, Amazon Prime and Netflix had four titles each enter production, three titles were produced for Foxtel and one title for Binge (Colin from Accounts). 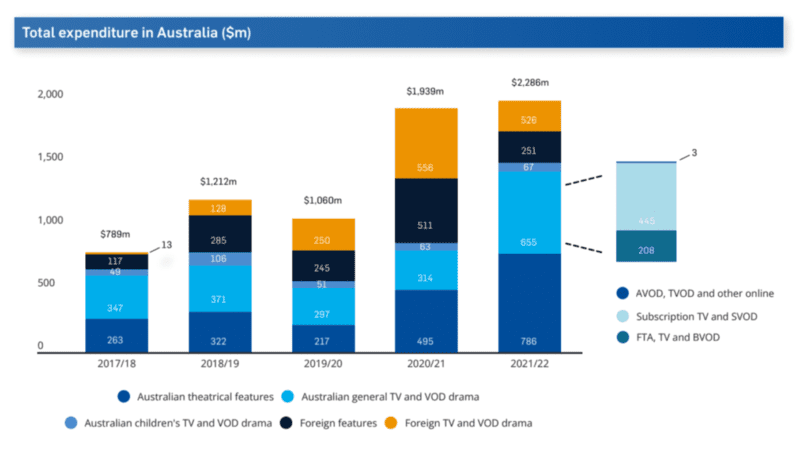 Increase in cost of hours: “In addition to regular inflation pressure, there is demand on facilities and crew. But also in the TV space, everybody now has to make shows that an audience looks at favourably compared to what everyone else is looking at from international markets.
“With films, there has been a significant increase in spend and at the same time a reduction in the number of films getting made. Globally, independent cinema is going through a moment in its history where more people are seeing movies in their homes on a streaming service than at the cinema.”
Drama demand: Do the numbers indicate less demand for drama, given its decline on FTA TV. “It’s actually the reverse. During Covid consumption of content generally, but particularly drama, went up significantly. It is audience behaviour that is driving the increase in production. FTA might be taking more of a commercial view. Audiences have changed the way content is screened. It is about when and where they want to see and how they want to watch. That is a fundamental shift and something that can be tricky for FTA normally.
“If you look at the most successful drama of the year, it was Mystery Road: Origins, which was also watched by many on demand via iview.”
Graeme Mason, Screen Australia
Changing business models: Mason noted that FTA businesses with their own on-demand SVOD platforms – Paramount and Nine – have increased their Australian drama output. “Those platforms are keen to commission because they know Australian audiences will watch, but they move shows around between their SVOD and FTA platforms.”
Meeting the demand: Screen Australia is working with the Federal Government to coordinate with various parts of the industry to better meet the demands of the sector. “Not just to meet current demand, but to build logically future crews.”
Business implications: So much content on offer does have business implications, said Mason. When asked if there could be platform rationalisation in the future, he replied: “I do think there could be a shakedown. In production spend we have seen Netflix curtail globally a little. Are families going to be able to keep as many as six subscriptions?
“We are thrilled to see the increase in production this year. But it is one year. We need to see what will happen long term and if the same number of players continue to be active in the market.”
Audience behaviour: “The other variable is audience behaviour. At the moment we are still seeing peak content viewing. That was during Covid and when we were stuck at home and we got used to it.
“Let’s look at this summer. If we eventually have a good summer, will more of us be outside? However, I think there is now a generation obsessed with watching content from a variety of places. This boom will continue for a while yet. They might be a shakedown in the players, but the volume of content we are watching will stick at these high levels.”
Content regulation: As to continued calls for Australian content regulations for streamers, Mason observed: “One year of increased involvement and engagement does not a pattern make. The sector is doing incredibly well, but it is essential to ensure Australian content continues to get made.”
Mason also pointed out the streaming business model is still very new and untested over a long period of time.
See also: Annual Screen Australia drama report shows record-breaking $1.9 billion 2020/21 expenditure
The Drama Report uses data from industry to provide an overview of the production of local and foreign feature, television, VOD and children’s drama titles, as well as PDV activity. All production expenditure is allocated to the year in which principal photography began. PDV employs a secondary method of analysis, which is outlined in the PDV section below, and in the report. ‘Drama’ refers to scripted narratives of any genre. This Drama Report uses new categories for Australian drama, providing better insights into production of general and children’s drama across all platforms. All data in the report has been re-categorised, enabling analysis of trends.