Author
View : 2.6K
3 Min Read
Updated – Oct 25, 2022, 12:00 IST
Get every cricket updates! Follow us on
Brisbane Heat Women will be locking horns with Sydney Thunder in the 18th match of the ongoing Women’s Big Bash League (WBBL) 2022 at the Allan Border Field in Brisbane on Tuesday, October 25. Both teams have had contrasting fates so far in the competition.
Brisbane Heat have been one of the best as well as consistent sides in this edition of the WBBL. They have won three out of the four matches that they have played so far and have six points to their tally at an impressive net run rate of 0.659 and occupy the second position in the points table.
Heat are heading into the contest after a convincing 26-run win over the Melbourne Renegades in their previous fixture that yielded a result.
Things have not fallen in place for Thunder in this edition of the tournament. They have had an inconsistent campaign so far having suffered three losses in five games including a no result and a solitary win with three points to their tally at a net run rate of -0.981.
Venue: Allan Border Field, Brisbane
Date and Time: October 25, 12:45 PM IST
Telecast & Live Streaming Details: Sony Sports Network and Sony Liv
The bowlers are expected to get a lot of assistance from the Allan Border Field surface in the initial overs as batting will not be easy with the wicket being bouncy. However, things will start getting better as the contest progresses and therefore, the captain winning the toss will look to bowl first.
Jess Jonassen (c), Grace Harris, Georgia Redmayne (wk), Danielle Wyatt, Georgia Voll, Amelia Kerr, Laura Harris, Charli Knott, Pooja Vastrakar, Nicola Hancock, Courtney Sippel
Rachael Haynes (c), Tammy Beaumont, Phoebe Litchfield, Amy Jones, Tahlia Wilson (wk), Sammy-Jo Johnson, Olivia Porter, Lea Tahuhu, Lauren Smith, Belinda Vakarewa, Samantha Bates
Georgia Voll:
Georgia Voll was the difference-maker in the eventual outcome of the last game between the Brisbane Heat and the Melbourne Renegades where she scored an impactful 52 runs from 37 deliveries. It turned out to be a match-winning knock as Heat ended up victorious by 26 runs. Voll would be expected to showcase yet another power-packed performance.
Charlie Knott:
Charlie Knott was the match-winner for the Brisbane Heat in the last game with the ball in hand as her impressive three-wicket haul took the game away from the Renegades chasing 164. Knott finished with figures of 3/19 from her four overs at an economy of 4.75. Knott would be hoping to maintain consistency against Sydney Thunder. 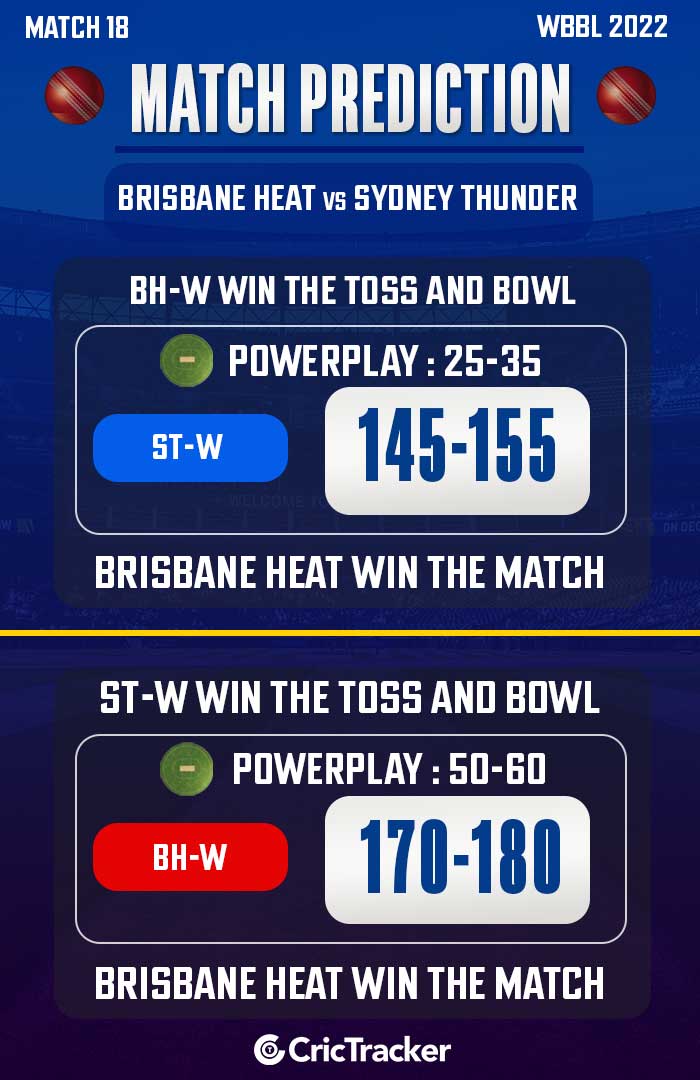